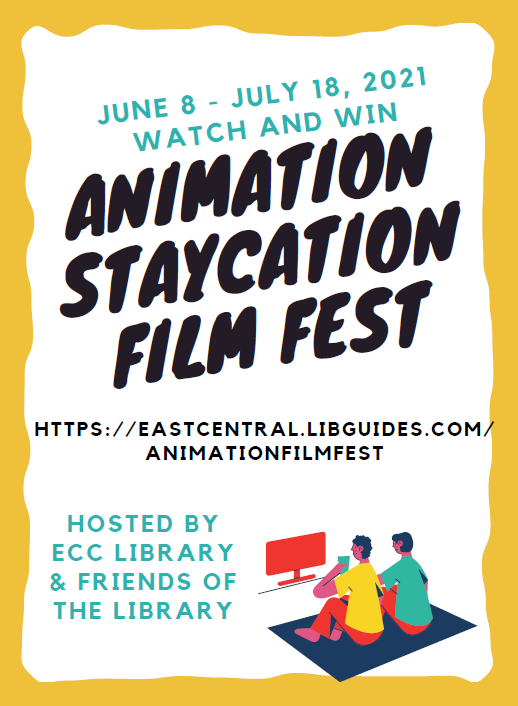 Welcome to the Summer 2021 Animation Staycation Film Fest at East Central College, brought to you by the ECC Library and Friends of the Library.

This film festival is open to ECC students, faculty, and staff who have ECC Library log-in credentials.   Some films are available for streaming and some have a physical DVD to check out, please see each title for more information.

From June 8 through July 18, if you watch at least two of the selected films, you can fill out a post-viewing survey and enter to win a gift certificate to Wal-mart.

Click here to complete the survey and enter to win, https://forms.office.com/r/A0navvZT6F

A note to audiences: ECC’s Animation Staycation Film Fest is open to ECC students and staff members who have ECC Library log-in credentials. These films are targeted to that audience; however, if you’d like to research the individual titles and their ratings/age-appropriateness, we recommend you visit Common Sense Media at https://www.commonsensemedia.org/.

From June 8 though July 18, if you watch at least two of the selected films, you can fill out a post-viewing survey and enter to win a gift certificate to Wal-mart.

YES! You can access all of ECC Library's databases from home.

When you select a specific database (like Feature Films for Education or Films on Demand) it may prompt you to enter:

You may be requested of a secondary login as well, please contact the library by phone.